The Restore from Backup action allows you to upload an iOS backup created from iTunes or Configurator to GroundControl, which can be used to further customize your devices.

⚠️ We do not recommend this feature with iOS 13. iOS 13 introduced changes that made it difficult to use backups while keeping the device on WiFi. iOS 13.4 further changes the Restore from Backup process to display a dialog that inhibits automation.

DEP backups require you have uploaded GroundControl’s supervision identity into your MDM before you create the backup.

Future iOS versions may further limit the use of backups.

GroundControl is not able to skip all setup screens on iOS 13.4 Beta when restoring a backup. 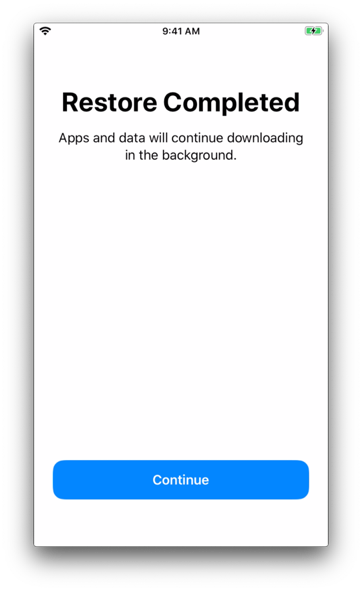 This prevents a fully automated setup and, despite the dialog displayed, apps from MDM will not load. In addition, until this dialog is dismissed, GroundControl is unable to launch apps, and is unable to use out Checkout Locker app to lock the device.

I was using a backup before. What should I do now?

Many GroundControl customers depended on a backup for touch-free provisioning. Unfortunately, this feature is no longer recommended for iOS 13.4 and above. The following alternatives are available to these customers:

Unfortunately, removing the backup will mean more setup and configuration to be done by hand by your users or staff.

Unfortunately, no MDM can control these features today.

Backups and iOS 12 and earlier

This legacy documentation is included for reference. Backups are no longer recommended for iOS 13 and greater.

Please note while many settings are preserved in a backup, iOS backups are NOT exact, mirror images of an iOS device: they do not include actual applications or the iOS operating system itself. Backups may include app content and settings, but what’s backed up really depends on the specific app. We recommend testing your workflow thoroughly to confirm desired results.

GroundControl makes sure that backups are portable:

We have published instructions for creating a backup in a separate document. 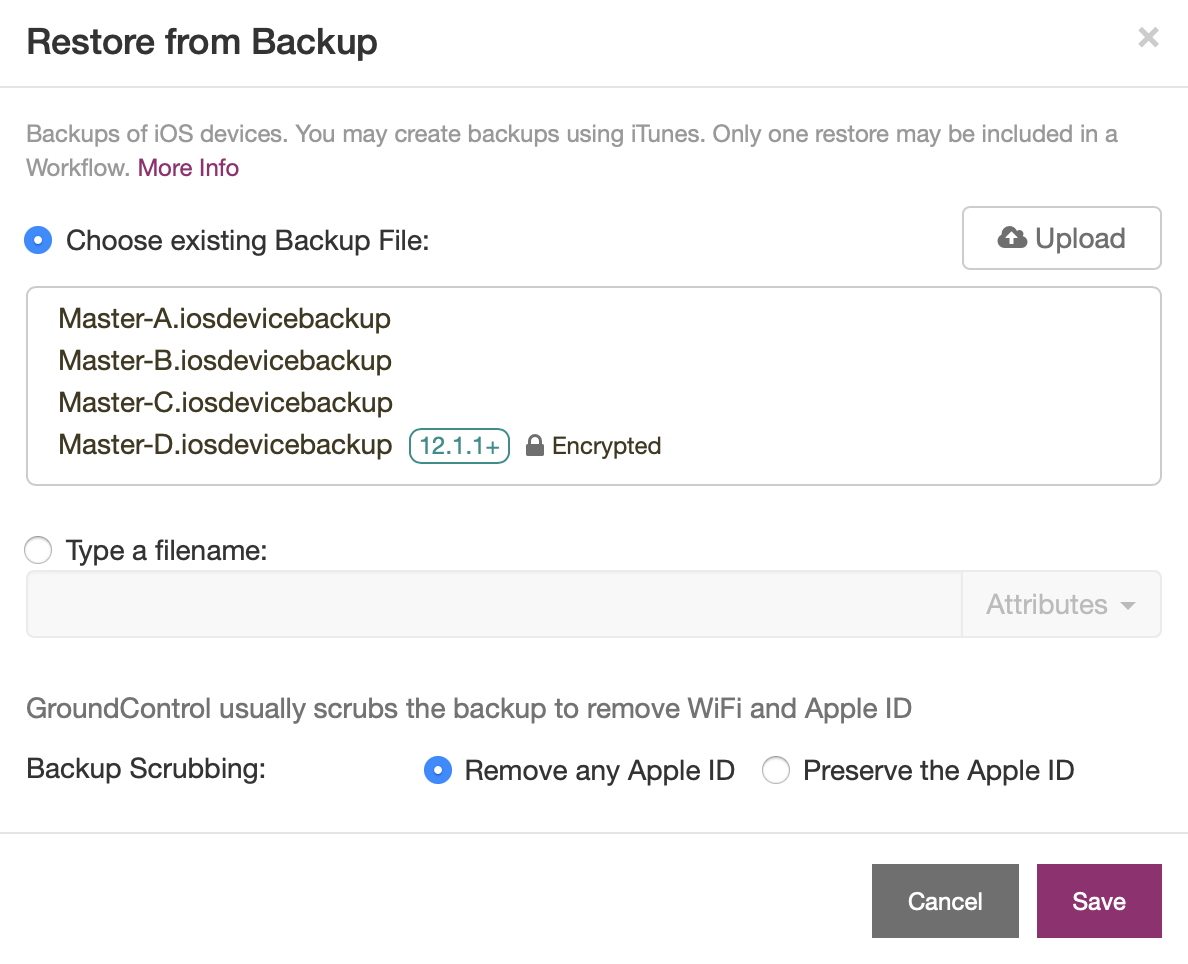 Use the “Choose existing Backup File” radio button to select a specific backup file to use. Alternatively, you may choose the “Type a filename” option to enter the name of the backup file as text. This is useful if you wish to use attributes for intelligent workflows.

Backups display the iOS version. This helps you remember the version of the original iOS device. For example, the backup below may be used with iOS 12.1.1 and greater, including iOS 13.

To upload a new backup , click the “Upload” button. The maximum upload file size is 4 GB.

GroundControl detects encrypted backups when uploaded, and prompts you for a password.

By default, GroundControl does some cleanup on the backups you upload. We remove old WiFi networks, MDM enrollment, supervision, and Apple IDs.

What Settings do Backups Preserve?